The M&A Boom: How long can it last? 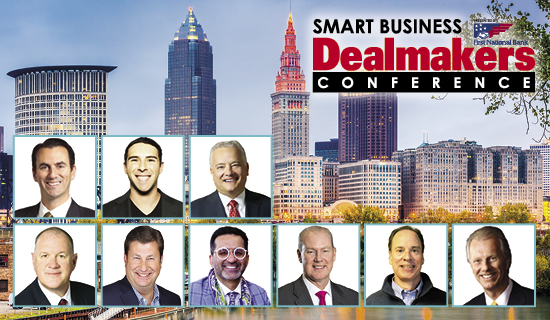 Today’s deal environment is one of the most active that Anthony Manna, Signet LLC chairman, has seen in his career.

“It is off the charts,” he says. “And the big reason: There’s money everywhere. It is flooding the market.”

Dealmakers we interviewed all agree: The abundance of capital available in the market continues to drive deal flow. Most expect the deal market in 2022 will remain comparably active to 2021’s super-heated deal year. However, worrisome macro conditions are creating turbulence, as well as speculation that a year-end recession looms.

First National Bank President – Cleveland Region Jeff Bechtel says buyers and sellers have taken notice of challenges with supply chain disruptions, rising inflation and labor challenges — as well as evolving geopolitical events — which have slowed the pace a bit from a very busy M&A market in 2021. Still, Bechtel says, the landscape remains strong and active for companies pursuing all aspects of M&A activities.

We talked with several area dealmakers about how they see the current market, how buyers, sellers and entrepreneurs are faring, and their expectations for how the remainder of year will play out.

State of the market

There are a lot of interested investors on the private equity and corporate sides who have significant funds to invest, says Ansir Junaid, chairman of SupplySide Group.

“As a result, we are seeing probably the most deals we have seen in the past decade, but also larger purchase prices due to higher valuations from the intense demand,” he says.

Inflationary trends impacting everything from energy and food to labor and other commodities make evaluation of acquisitions more difficult.

“Evaluating the impact of inflation on both revenues and costs and the likely changes going forward is a challenge for anyone pursuing new transactions in 2022,” Junaid says.

Although growth is still strong, Daniel Walsh, CEO of Citymark Capital, says the macroeconomic stress means that when underwriting a potential acquisition, there should be more focus on increasing expenses, primarily driven by wage growth. Some downward pressure on multiples is expected as interest costs go up, potentially driving those multiples down somewhat.

“But there’s still so much capital out there I don’t think there’s going to be a material change with those drivers,” Walsh says.

Kevin R. Weidinger, president and CEO of Great Lakes Fasteners, says the global supply chain disruption has forced an examination of the layers of domestic and international sourcing strategies, which is leading many to sharpen predictive measures to manage through. Additionally, he says there is fear that economic issues are going to come to a head, slowing company investment and growth and hurting consumer confidence.

“With respect to the impact to M&A, deals will still be available, yet there will likely be far fewer of the well-run, financially sound beauties we all seek,” Weidinger says. “We will start to see more businesses bruised from the many uncontrollable attacks from the series of events over the last three years.”

The Federal Reserve’s declaration that there will be roughly seven interest rate increases this year and that it will trim down its balance sheet over the course of several months will affect certain marginal businesses up for sale, Manna says. Combined with supply side issues, there’s a threat of recession toward the end of this year, which will negatively affect the M&A environment.

And with the current yield curve inverted — the two- and five-year rates are higher than the 10-year rates — Walsh says near-term borrowing costs are more expensive, though that could favor some buyers.

“To the extent you have buyers, especially corporate buyers, who are more strategic, they might be able to pay a little bit more if they have a longer time horizon and a cheaper cost of capital to be targeting their acquisitions in the M&A space,” he says.

Jonathan Hatch, president of Little Mountain Industries, says issues in the global economy have helped some domestic sellers whose markets are in North America.

“The demand is high for their products, and that’s helping sellers — just the strong business environment, the high level of activity,” Hatch says. “They are able to overcome the shortcomings of inflation and labor issues and able to pass along the cost increases that, in years past, domestic players couldn’t pass along. So, that’s really helping businesses become potential sellers in the market.”

However, on the buy-side, Hatch says the uncertainties have meant that many sellers’ deal books have a lot of up and down EBITDA, making it tough as a buyer to pin down a valuation.

“You don’t find a lot of businesses that are five to 10 years of solid EBITDA with 10 percent growth every year, or even steady EBITDA,” he says. “They’ve gone down, or they’ve gone way up and then come back down, and there’s all sorts of adjustments that need to be made. ‘Well, we had a supply chain issue here, or a customer had a supply chain issue, or we had to raise our rates for our labor and we’re not sure if we’re going to have to keep paying them more.’ All that movement and noise in earnings is certainly tough for valuations.”

Many sellers, SupplySide Group’s Junaid says, will be pressed to explain projected and recent results within the context of how management has acted or will continue to take action to offset the negative impacts of inflation on results.

“Those companies who show a track record of being proactive in pursuing pricing changes ahead of cost increases and who have also taken initiative on repeated action to address the cost side of the house will likely show better in a deal world and will continue to experience higher valuations,” he says. “Despite a hot seller’s market, lower to moderate-quality sellers are not getting attention due to the elevated level of deal activity.”

These conditions mean buyers are facing more unknowns, according to Lou Schneeberger, chairman of Proformex.

“Buyers are paying premium dollars for every single deal,” he says. “They used to be able to look at the five-year model and let’s say they were 80 percent confident that that model is going to come true. If people are willing to sell now and they are impacted by COVID, there are more unknowns. So, it’s a bit riskier today. And the problem is they can’t lower the price because they’re not going to get the deal, so they’re taking a bit more risk today than they did two years ago for that same return. And hopefully, they’re going to be able to execute and they factored that in.”

Great Lakes Fasteners’ Weidinger says buyers have many deals to look at as sellers continue to be motivated by market conditions. Those buyers who can snag well-operated companies, however, will pay a premium, which means overpaying could be a very real buy-side issue when demand for a business’s goods and services slows.

“Loading up the acquired business with debt financing based on past performance could be a cash crunch,” he says.

Kevin Murphy, CFO of Vytalize Health, says there’s been a substantial increase in sophistication in the venture capital process over the last several years, during which the criteria have become more rigorous.

“The demands of many of the venture capital firms are for more proof of concept, more KPIs behind you, more runway behind you, which, from the entrepreneur’s perspective, has an irony to the degree of challenge that creates, because without the capital, how do you get the proof points? How do you survive as a company? How do you make payroll? So, the stress from that is greater,” Murphy says. “That doesn’t necessarily mean that it has weeded out any number of entrepreneurs; I think there are more than ever.”

For entrepreneurs, Murphy says there is a lot of capital that is very focused on supporting early stage businesses with high or extremely high growth potential. That can be attributed in part to returns, whether it’s the stock market or other asset classes, that haven’t necessarily been as robust. Additionally, there is a push in some larger venture funds to not miss the next unicorn.

“What is definitely going well from that perspective is the number of looks that you can get,” Murphy says. “You get a lot of noes, and it’s a tough process, tough mentally to go through.”

He says he’s also seeing increased interest, and thereby coverage, from the press, largely facilitated by the internet. Through its speed, frequency and volume capabilities, the internet has helped promote companies that, 20 years ago, likely would never gotten off the ground.

“From that perspective, it is an amazing blessing or a curse because you can get a ton of coverage, and that can take you to an incredible place in your career,” says Matt Buder Shapiro, CMO at Vytalize. “Or, as we can see with probably too many streaming shows airing programs on founders and what went wrong, there’s a lot of excitement around seeing startups crashing. So, as a founder, an entrepreneur, right now, the spotlight is on you, and they’re looking for success or failure.”

Even with the increased press coverage, there are aspects of the early stage world that aren’t getting enough attention. Todd Federman, managing director of North Coast Ventures, says the SEC has talked about making changes to the Accredited Investor definition, specifically regarding raising the income and net worth thresholds.

“Doing so would make at least 50 percent of today’s angel investors ineligible to invest in Reg D deals,” Federman says. “Instantly sidelining half of the angel investors would have a huge impact on startups, especially in the Midwest, which has a smaller set of seed-stage VCs. The Angel Capital Association and other groups are actively engaging to head this off, but it is a huge risk.”

Looking ahead, Signet LLC chairman Manna expects the 2022 deal year will match last year but will slide off near the end.

“I still think it’s going to be a very good year, but with the rising interest rates, I see the second half of the year definitely slowing down as far as opportunities go, as far as those that are closing,” he says.

SupplySide Group’s Junaid says absent some major economic or geopolitical upheaval occurring, it is likely 2022 finishes off as a strong M&A year — maybe not 2021 levels, but comparable.

“This may also be a more active year in the distressed parts of the market, with rising borrowing cost making it difficult for over-levered companies to carry on and pushing a wider swathe of ‘mediocre’ companies into distress or making them actionable as targets,” he says. “Buyers will start to underwrite recessions and valuations will come down.”

Walsh, of Citymark Capital, expects a strong year, though he says results are likely to be mixed depending on the sector.

“It’s really going to come down to how quickly rates are increased and how much the cost of capital gets impacted,” he says. “Some sectors will benefit significantly, and some will lag, as they always do. But overall, it’s going to be a solid year.” ●