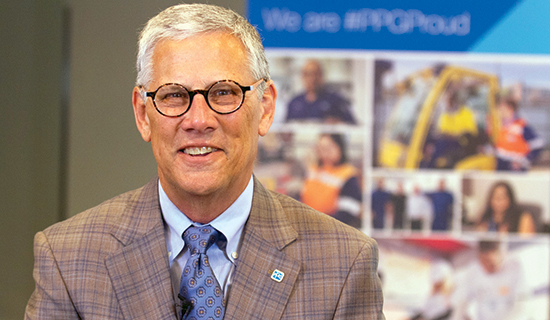 Michael McGarry’s relationship with PPG Industries Inc. began in 1981 as a marriage of convenience. PPG had an open position available in a location right across the interstate from where McGarry’s wife worked, convenient because they had only one car.

Since then, in his rise from thar role as an engineer at the company’s Lake Charles, Louisiana, chemicals complex, through to his current role as PPG’s chairman and CEO, McGarry has lived around the globe, encountering and overcoming challenges that he never could have dreamed of all those years ago. The experience has given the leader of the Pittsburgh-based global paint, coatings and specialty materials provider an earned perspective, not just on how to run a company but on how to make each new place feel like home.

“Everywhere I’ve been has been my favorite place to live,” McGarry says. “I’m more of a glass-half-full person. I think people are resistant to change. But there’s something great about every city. You just need to go out and find it.”

That attitude has allowed McGarry and PPG to remain flexible and fruitful even amid rapid evolution in the industry and in the world. Between the COVID-19 pandemic, global supply chain disruptions, commodity cost inflation, demand decreases in Europe and other unforeseen issues, the last few years have been particularly demanding of a multinational corporation leader like the 64-year-old McGarry.

Yet when you’ve been with one company as long as McGarry has, you learn to roll with the changes without losing sight of what makes you successful.

As they made plans to marry, it was only natural that they wanted to find first jobs as near to each other as possible.

“She had a real good understanding about what she wanted to do coming out of school, and that was non-routine chemistry,” McGarry says. “She was looking around for various jobs,. We interviewed in a number of places jointly, and she got a job offer from the Conoco Chemical Company in Lake Charles. And right across the street was PPG. At that time, not having any money, she had a car and I didn’t. So I figured it would be best to take a job offer from literally across the interstate so that we could carpool to work, as opposed to another job I was offered three or four miles away.”

From that simple decision, McGarry, a native of New Orleans, had no way of knowing he’d be with PPG more than 40 years, let alone that he would one day lead the company.

But that first job allowed him to understand the business from the ground up. He began by assisting with redesign processes for the chemical plant. About a year later, he got the chance to work maintenance in the plant itself, helping to produce caustic soda beads. Then he worked in operations. Then he helped integrate a new plant for the company’s silica products. All told, he had four distinct jobs within five years — growth experience that would shape the rest of his career.

One day, PPG’s director of sales and head of manufacturing visited Lake Charles to meet with some of the talented young workers — McGarry included — and discuss their goals. McGarry told them he would like to be a plant manager one day.

“Well,” one of the visitors replied, “how old is the plant manager?”

McGarry guessed that the man was probably 55 years old.

“Why do you want to wait to hit your dream job at 55?” one of the visitors asked.

With that, McGarry was set on a different course in which he could rise up PPG’s ranks more quickly. He was offered a position in silica sales, with an accompanying move to Charlotte. That turned out to be the first move of many. He moved to Pittsburgh for a marketing position in the silica business, then to Thailand to help set up a silica plant in a former tapioca field that was full of cobra snakes.

“It was just me and a finance director,” McGarry says. “We had to hire the whole team to run the plant. We had to basically build a business from zero to fully functional. And I was prepared for that job because I had worked in our silica plant in Louisiana and then been in sales.”

After two years in Thailand, McGarry returned to Pittsburgh to be a business manager for PPG’s TESLIN sheet (a synthetic paper used for tags, labels, etc.), then a product manager in the derivatives, chlorine, liquid and dry caustic soda businesses. In 2000, he became general manager of fine chemicals, then vice president of chlor-alkali and derivatives. And in 2006, he moved overseas again to become vice president of coatings and managing director of PPG Europe in Rolle, Switzerland. Two years later, he returned to the Steel City to become senior vice president of PPG’s Commodity Chemicals, then executive vice president, then COO and, finally, CEO — the position he has held since July 2015.

Yet through all of those roles on different continents, McGarry maintained a basic sense of duty and accountability that had been instilled in him in his formative years with PPG.

“When you’re on the engineering team, you have to figure out when you can get access to the equipment to do upgrades and you have to build credibility with the folks running the unit,” he says. “I was on the ground to make sure modifications were done on time and done right. And when you’re in maintenance, when there’s an outage, people want to know that you have the right people and the right equipment lined up. A high degree of reliability is important in those jobs. You have to have the ability to listen and learn and be reactive to the needs of various entities.”

During McGarry’s rise within PPG, his evolution in job responsibilities reflected a broader shift for PPG itself. Founded in Creighton, Pennsylvania, in 1883 as the Pittsburgh Plate Glass Co., PPG made a strategic shift in the 2000s to focus more on coatings.

“We had good technology,” McGarry says. “It was a global business, and we felt we could drive the consolidation in the coating space.”

PPG has come to dominate that space, in large part because of McGarry’s eye for acquisitions. The 2008 purchase of the SigmaKalon Group — an acquisition led by McGarry — for $3.2 billion was a particularly big turning point in the paint and specialty coatings business that led PPG to where it is today. More recently, the 2021 purchase of Tikkurila, a Finland-based producer and distributor of decorative paint and coatings, and the 2020 purchase of Ennis-Flint, a global leader in pavement markings (leading to the creation of PPG’s Traffic Solutions business unit), are examples of how PPG continues to grow.

What goes into a successful acquisition?

So does each year. And the years 2020 to 2022 have had more twists and turns than anybody could have anticipated — beginning, of course, with COVID-19. Because of its presence in China, PPG had an earlier understanding of the seriousness of the virus than most U.S.-based companies.

“We actually had a plant in Wuhan,” McGarry says. “So we had first-hand information from our Chinese team. And because we have a strong safety culture, they were already thinking through what this meant from a safety standpoint.”

The next phase of COVID was a massive transformation from people working in the office to working both remotely and hybrid.

Massive changes in the global economic environment, including high inflation rates, have brought added challenges. McGarry credits the quality of his team for helping him navigate them.

“We are well-positioned in the marketplace,” he says. “If you go through each of our businesses, we’re number one in refinish, number one in aerospace, number one in automotive. We invest more in research and development than any other coatings company, and we have a lot of innovation coming out of this. And from a sustainability standpoint, I think the team is focused on how we help our customers make their processes more sustainable, as well. Our technology team, our sales team and our marketing team are highly focused on making that happen. So I think the best days of PPG are ahead of us.”

McGarry might have come to PPG as a matter of convenience, but he’s used that first opportunity as a springboard to a long and successful career that has broadened his horizons in so many ways. Whereas some might see 40-plus years with one company as a recipe for complacency, McGarry has been too busy moving up the ranks and moving around the world to ever feel static. 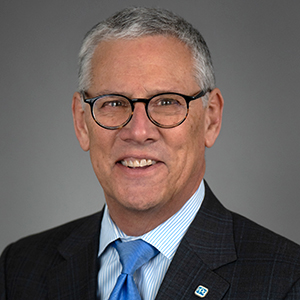