Dee Haslam: In sports and business, people are the foundation of success 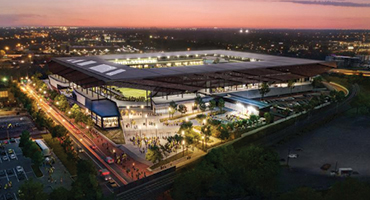 Dee Haslam, and her husband, Jimmy, both followed their fathers into the family businesses and learned early the concepts of good leadership and good business. While there are many similarities between sports and business, owning a team like the Cleveland Browns and the Columbus Crew isn’t a one-to-one ratio.
“Without a doubt, the emotional component and reaction of hundreds of thousands of fans paying attention to the majority of our decisions is the biggest difference,” says the CEO of the Haslam Sports Group. “That is one of the beautiful things about sports, but your decisions are made under a microscope that you don’t have in private corporations.”
She and Jimmy take the responsibility of the stewardship of these teams to heart. Even as the Haslams try to learn from their mistakes, they know how much the success of the Browns and Crew means to their respective communities.
Haslam, a keynote speaker at the Columbus Chamber of Commerce annual meeting in February, shared her thoughts on sports, business and more.

On one of Haslam’s first visits to Columbus, after investing in the Columbus Crew, someone asked her why the couple wanted to own a sports team. It came down to her family’s love of sports and the heated competition at family gatherings, from flag football to ping pong and cornhole.
Because sports are such a great connector, she says they thought owning a sports team would be fun and easy. It combined their two favorite things — sports and business. That impression wasn’t changed by their experience as minority owners of the Pittsburgh Steelers, where they didn’t have any responsibilities.
That changed in 2012, however, when the Haslams bought the Browns and sold their shares in the Steelers.
“It has been challenging, and at times heartbreaking, and a huge learning curve, but we have loved being part of Ohio,” Haslam says. “The people, the work ethic, the openness, the diversity, all have invigorated us to care deeply about this great state.”
In summer 2018, the family doubled down on its sports ownership by investing in the Crew, with the Edwards family, to keep the soccer team in town.
“It was remarkable to watch the community come together — the Columbus way,” she says. “Everyone got involved and let it be known that the Crew belongs to Columbus.”
One principle that Haslam says they learned from owning the Browns — which they hope to apply to the Crew — is the importance of having people with strong leadership and the intelligence and personality to navigate the many unanticipated challenges that will cross their desks.
“Once you have the right leaders, they usually hire individuals that, individually and collectively, impact the team in really positive ways, so there is a strong trickle effect,” she says.
So much of your success is based on people, Haslam says.
“In sports, as in business, the leadership and execution skills in the top management positions or coach/GM role are critical,” she says. “We are excited about the individuals we have in key positions now because of those leadership skills, their desire to be collaborative and embrace the notion of utilizing all resources in their decision-making. The same principles apply in good business organizations.”

A plan for a new stadium opening in summer 2021 came together quickly thanks to Columbus entities’ ability to collaborate; the current stadium will be repurposed into a training facility and sports complex.
“Sports are the great unifier no matter what your political beliefs, your faith, your lifestyle,” Haslam says. “A team can unite you.”
Not only will the new stadium complete the Arena District, it will be used for more than soccer games.
“We wanted the community to be able to use it 365 days a year,” she says. “It will be a gathering place for everyone to work, live and play — not just on game day, but throughout the year. The community plaza will be the ultimate place to bring people together for festivals, concerts cultural events and more.”
In addition, collaboration has been critical to helping the Haslams begin to utilize the platform of the Crew and the Browns to impact the community. Because playing sports gets kids to school and keeps them in school, they worked with the Ohio Department of Education and Proving Ground out of Harvard University to develop a strategic plan to fight chronic absenteeism.
“We are in 13 districts now, but every district has access to the information,” she says. “Keeping kids engaged and in school will pay off for the entire state.”
So, to go back to the question Haslam was asked about why she would want to own a sports team:

“We are involved in sports because we know what it can do for a city, a region and a state, and we know that it’s a way to give back by getting kids active and engaged,” Haslam says. “We know that when you win, it’s an amazing feeling that can be celebrated with a dynamic, diverse group of fans.”