Bill Papariella grew up dreaming of a life spent making movies. He took the classes in high school and college that he hoped would help him achieve that goal. He couldn’t get to Los Angeles quickly enough to get started on his career in the film industry.

Unfortunately, things in Hollywood then were changing, and it was about to push the Pittsburgh native to a different path.

“I had no aspiration to go into the jet business,” says the president and CEO of Jet Edge International. “But one thing I did want was more stability. The movie business was changing pretty dramatically.”

It was the early 2000s and the major film studios were focusing more on bigger movies, leaving some of the smaller companies in the business in a tough spot.
“You just couldn’t make a living making movies outside the major studios,” Papariella says. “Maybe you’d make $50,000 or $75,000 a movie. Let’s say you made one movie a year. You’re 32 or 33 and nobody is dreaming of having kids in Los Angeles and putting them in private schools making that kind of money. It forced me to think maybe I should take a hard look at what I’ve learned and the people I’ve met.”

Papariella had earned the post of senior vice president of production and development at Universal Studios. He learned a lot about how to get things done, how to get people where they needed to be and how to stay within a schedule and a budget.

As he moved away from that business, Papariella gained quite a bit of knowledge about the private aviation industry working at Marquis Jet, NetJets and Sentient Jet. It allowed him to buy Jet Edge in August 2011 and make a go at leading a private jet business from the top.

“I almost would rather have less money to be in the movie business and say, ‘I’m in it and doing it,’ than be in the jet business making a lot more money,” Papariella says. “It was a very difficult decision. It took me probably six months to really get my head out of the business and wake up every day knowing I wasn’t in the business. I still struggle with it.”
Despite the struggle, Papariella has built a business with 75 employees and 120 full-time pilots that is taking off in a big way.

Papariella bought Jet Edge because he wanted to get involved with heavy jets, planes that had large cabins and flew wealthy customers.

“That’s where the money was at, where the big boys played,” Papariella says. “It’s an area that was a little more recession-proof.”

There was a lot of money to be made, but the private jet business is not without its challenges.

“We’ve grown faster than any other company in this industry by far in the United States,” says Papariella of his business, which expects to make $125 million this year.
“That growth, coupled with the logistics of flying these aircraft has created a lot of process issues, a lot of structure issues. Those can really cripple you in certain areas if you don’t get them fixed quickly.”

One thing Papariella had to learn was how to deal with customers without losing his cool when they didn’t treat him the way he felt he should be treated.

“A lot of these guys are very terse,” Papariella says. “They want what they want. I would combat that, and it didn’t go well for me. I’ve learned to listen first and hear the clues of what it is they are really saying to me versus me thinking I hear it and being combative with them.

“I’m a Type A kid from Pittsburgh who grew up on the south side of Pittsburgh. I’m predisposed to a street fight. I’ll go there if I get angry enough. So for me, it’s a really good lesson in listening better. It’s served me well. I still could do better at it, but I’m growing in that area. I think any successful entrepreneur had better learn how to listen or they are in real trouble growing their company.”

As Papariella has found his groove as a customer service provider, he has also worked tirelessly to integrate automation into his operational processes and thus reduce logistical problems.

“We’re developing new software systems to help automate this process better and have a little more predictability on how we’re running things logistically.”

But even if you have the best automation system in the world, you still need good people to manage it and execute the plans. It’s another area where Papariella has learned and evolved as a leader.

“The cool thing about being an entrepreneur is you start off, and you get all these minefields in front of you, and you’re trying to hire the right guy,” Papariella says. “I had worked with my senior managers for a long time outside while I was at other companies, and they were at other companies.

“But when you grow from 12 employees to 78, there are a lot of people I don’t know. Originally, we would just hire people because we thought they fit the culture and thought they interviewed well.”

The process has changed to include a hiring committee that collaborates on personnel decisions.

“People have to interview with the committee in order to be hired and there has to be a unanimous decision by the committee,” Papariella says. “We look for you to be a cultural fit. The committee will come up with a number of action items that we want to accomplish inside the interview.”

When Papariella interviews, he likes to probe to see what kind of difficult situations the job candidate may have faced in his or her past.

“How did it work out for them?” he says. “Different lines of questions like that can help me understand how they might operate internally here. We’re much more stringent on who we’re looking at and what we want to do. For me, it’s worked pretty well. I would say nine out of 10 employees we hire now, it’s been good.”

The better you can get at getting others involved in leadership and matters such as hiring, the better off you’ll be as a leader.

“I think all entrepreneurs obsess,” Papariella says. “It’s a learned trait to let it go, but you almost have no choice but to do it because you wouldn’t survive if you didn’t. It would drive you into the dirt. For any entrepreneur, it’s delegation, good process and good structure. It will help your life and your health immensely.”

Don’t look too far ahead

“When you’re growing at this level, the chance of you not changing your business plan is probably zero,” Papariella says. “I run the company off of a three-month plan right now. We hit the three-month plan, and we go into the next three-month plan. Maybe in the next year, we’ll look at a longer term goal. We look at what want to look like, the dream scenario, but we build this company on a three-month basis versus years.”

Papariella believes there are two kinds of entrepreneurs in the world. There are the startup entrepreneurs and those who have built and established their businesses and can now make more concrete plans to deal with the future.

“A guy like me, I’m trying to get to a place where we’re a viable business,” Papariella says. “We’re a good business and we’re getting better. But there are still a lot of roadblocks we have to get through. I think in the next 18 months, we’ll be a viable business. But you have to separate the two, the guys in the shoes that I’m in versus the guys who are established.”
If he were to develop a three- or a five-year plan, Papariella says there is almost no chance he would be able to stick to the points of the original plans.

“The deals you’re cutting with partnerships and sales will inevitably change the dynamic of where you’re going,” Papariella says. “A lot of entrepreneurs in my shoes would feel very similar that it’s a struggle to meet the three- to five-year goals, so why do it?”

As Jet Edge continues to grow, Papariella is firmly focused on making his business a leader in the private jet industry. But he has not completely abandoned his childhood dream of a career in Hollywood.

“Frankly, I probably will go back to it at some point,” Papariella says. “Now is just not the time. But I have a love for that business. I know it very well. I’ll probably get into it a little differently than I did the last time.”

Papariella on not being starstruck: Coming out of the movie business, I had princes of countries pitching me stories. I’m sitting in a room with a guy who is worth $10 billion, and he’s pitching a story that he wants to be made in Hollywood, and I’m the decision-maker. So being in the movie business, you work with people at a very high level because everybody wants to be in it. So I’ve never been starstruck.

Papariella on his introduction to the private jet industry: I had a friend who worked for the PGA Tour, which had signed a jet company as a partner. The CEO was looking for an inroad into Hollywood. So my buddy came calling and said, ‘We just signed this new partner. You should really take a look at it. It would be a really cool thing for you.’

I had never been on a corporate jet before in my life and had no interest whatsoever. Working for the studios, the big guys flew private, but they would never take the mid-tier executives on the plane. So I said no.

After some convincing and meeting the CEO, I finally agreed, and I joined a company called Sentient Jet in 2006. That’s when it started. At the time the economy was booming. Even people who shouldn’t be flying private were flying private. You could trip and fall into a jet deal back then. 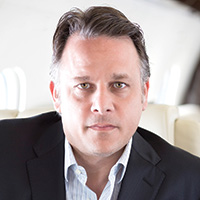