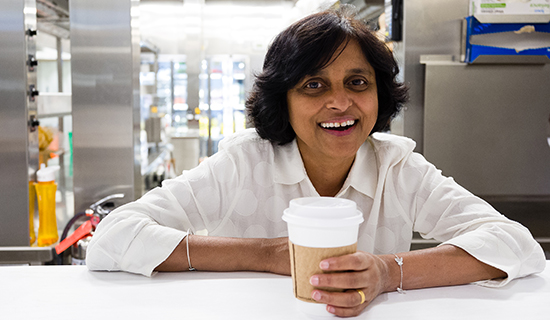 Raji Sankar and Randhir Sethi were working in the technology industry when they decided to call it quits and open a restaurant. The self-described foodies knew it was a risky move, but they were eager to introduce the American public to fresh, wholesome meals from their native India. And while the concept failed, the pair never gave up, and today, Wholesome International is thriving as diners embrace the warm, communal feelings of ancient India’s neighborhood ovens and gathering places — and the food that goes with it.

Sankar, co-founder and co-CEO of the restaurant development company, and her business partner Sethi created the Choolaah restaurant concept, which is delighting both Indian food fanatics and newcomers at seven locations (and counting) in three states, including two in Pittsburgh. But while Choolah might seem to be an overnight sensation, it is the product of painful, yet productive, lessons learned in a failed pan-Asian noodle experiment and of the operational skills sharpened by a burger-and-fries franchise.

“We always call it our second MBA,” Sankar says of the duo’s initial restaurant experiences. “It was truly a learning opportunity. If we didn’t have those experiences, we wouldn’t have Choolaah today.”

Sankar earned her actual MBA at Carnegie Mellon University in 2000. A native of Bhilai, India, she moved to the United States to pursue a bachelor’s degree in metallurgy and a master’s degree in mechanical engineering. She worked in artificial intelligence and consulting, cofounded a media company and served as director of business development for Printcafe Software — none of which pointed to her future in the restaurant industry.

But Sankar and Sethi, who worked together at Printcafe, bonded over a mutual love of food, and their shared Indian heritage guided their goals.

“We always had this dream of, ‘Why hasn’t Indian food been cracked yet?’” Sankar says. “In the U.K. and South Africa, it’s popular. But in the U.S., it wasn’t, outside of L.A. and New York. We love our food heritage, so why couldn’t we find food that is not heavy or bloating, that is very clean?”

So in 2003, they drew up a business plan for what would become Choolaah — then almost immediately set it aside.

“We realized very quickly that we don’t know how many elements of it work,” Sankar says. “We had never run restaurants before, so we were sure that the business plan was a way to start something and close it down very quickly for lack of expertise.”

They opted instead for the safer — but still risky — route of franchising. That led to one big miss, one big hit and a lot of discovery about how to shape a business and define a mission and values.

Sankar learned the hard way that establishing and maintaining a brand identity is vital. When she and Sethi opened Zyng Asian Grill in the heart of Pittsburgh’s Squirrel Hill business district in fall 2004, they had a seemingly ideal location, across from a popular bookstore and close to public parking and several major hospitals. They felt that Zyng, a fast-casual franchise concept that had launched in Montreal, would catch on so quickly they’d be able to open a dozen more locations in Pittsburgh and Cleveland over the next five years.

But within a year, Zyng had shuttered its doors.

“The whole concept changed from the time we signed up to what became reality,” Sankar says. “There was a change from fast-casual to full service, so that was a big change.”

There were other issues, particularly involving the franchise’s supply chain. Sankar says some trucks arrived with only half of the expected food, and an inconsistency in ingredients turned off restaurant-goers.

“Looking at that time, it was very hard to watch 23 stores open around the country, and none of them made it,” Sankar says. “There were some very smart people involved. It wasn’t for lack of that. But who you are — your brand identity — is very, very critical.”

Sankar juxtaposes that against the experience she and Sethi have had franchising with Five Guys, the national burger chain they applied to work with around the same time they opened Zyng. The concept was clear and consistent, focused and simple with made-to-order burgers and hand-cut fries, and the supply chain was reliable.

“If we were ever out of bread, they actually drove back to us,” says Sankar. “I mean, how can you not be grateful for that kind of support? It cannot be underscored enough when you have passion like that.”

Five Guys quickly caught on. Sankar and Sethi opened a second location within a few months and today, they own 25 locations in Pennsylvania and Ohio. And as Five Guys grew, so did its people, who graduated from the front lines to management, freeing up the pair to turn their focus back to their original idea: Choolaah. This time, they had the experience gleaned from their second MBA to guide them.

Cooking up a community

Employee training and engagement are critical to the success of Five Guys, and they became governing principles for Choolaah.

As the concept for Choolaah began to come together in 2012 and 2013, Sankar recognized that training would be especially important, as not many Americans are familiar with clay tandoor ovens, let alone know how to cook with them. But Sankar and Sethi didn’t want Choolaah to follow the assembly line model of many fast-casual dining experiences. They wanted to have a transparent kitchen, where food is prepared in front of the guest, creating a feeling of accessible authenticity.

That meant teaching American workers how to cook a complex menu.

“The big thing is educating people on a different kind of cuisine,” Sankar says. “Everyone knows what a fry is. You don’t have to explain that. But not everyone would know what a samosa [a fried or baked Indian pastry] is.”

Sankar and Sethi created training methodologies — including tastings and videos — that instruct on how to master the art of Indian cooking. Through this training, Choolaah instills in its ambassadors, as staff members are called, a sense of duty and accountability. This is reinforced by daily huddles at each Choolaah location, during which sales figures and guest feedback are shared with the staff. This is how Choolaah’s leadership strives to shore up areas of weakness while also recognizing and rewarding a job well done.

Choolaah also uses a daily pay model, so that workers have access to the funds they’ve earned should a financial emergency arise. In addition, employees receive referral bonuses when they bring talent into the operation, and cookies or cupcakes on their start date anniversary. There are fun employee competitions — a parade float challenge among the stores in the spring and a pumpkin carving challenge in the fall — and a weekly newsletter. And all locations close at 8 p.m. to give staff time to unwind.

“It boils down to how excited someone is to be a part of the organization,” Sankar says. “How are they contributing? How are they growing with it? Without that, there isn’t anything.”

A recipe for success

From their initial restaurant ownership experiences, Sankar and Sethi also learned the importance of details. The family that launched Five Guys tasted more than a dozen mayonnaises before choosing the one that became a fan favorite. In a similar vein, Choolaah’s owners insisted on custom spice blends so that visitors to multiple locations experience consistency in taste.

“You don’t want to have a different kind of tikka masala just because you went somewhere else,” Sankar says. “So we chose to take that tougher road of making our own spice blends, and we are very crazy about the quality and cleanliness of what they put into it.”

They also put a lot of time and thought into the restaurant vibe, with music, color and decoration choices contributing to a Museum of Contemporary Art type of feel.

“We wanted the space to be very accessible, very approachable to anyone who walks in, so that they are not intimidated,” says Sankar.
Since the first Choolaah location opened in the Cleveland area in 2014, the design has been refined, with the launch of a delivery kiosk and online ordering system just prior to the pandemic. The pandemic experience also reinforced the resiliency of the restaurant’s supply chain and taught Sankar and Sethi that they are capable of operating a Choolaah location in a smaller real estate footprint than what they had previously occupied.
That latter lesson is a valuable one as plans to open as many as 100 Choolaah locations in the next five years take shape. It’s an aspirational goal, but what else would you expect from two foodies who didn’t let their lack of a restaurant background dissuade them from plunging into the restaurant business.

“It’s funny to look back at the original [Choolaah] business plan,” Sankar says. “Our menu is pretty close to what was written in 2003.” ● 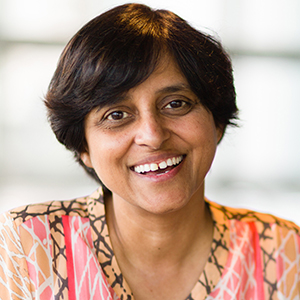