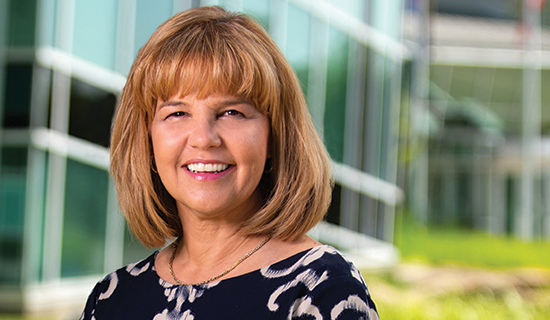 When Pamela Petrow took a relative’s advice and applied for a job at the company that came to be known as Vector Security, spending 40 years there never entered her mind. And she never imagined she would become the president and CEO of what is now the fourth-largest electronic security company in the United States.

But in following that initial tip from a cousin at a family reunion, then following her instincts, passions and work ethic, Petrow turned that first after-college job into a long and successful career — one that stands as proof that a person does not need to bounce from company to company to blossom.

Petrow has flourished while staying put, an experience that shapes her approach to her more than 1,500 employees.
“If you work for a great place, stay there and find ways to grow there, because there are a lot of companies that aren’t so great to work for,” she says. “So when you find one that is, make your mark.”

Having served first as a sales consultant, then head of the monitoring center, a branch manager, a district manager, COO and, ultimately, as president and CEO since 2010, Petrow has certainly made her mark, progressing and growing alongside Vector itself.

The Warrendale-headquartered company, originally known as PC Security, grew from a base of about 5,000 customers in Pennsylvania and eastern Ohio to serving nearly 400,000 residential, business and national account customers in 58 branches across North America and the Caribbean. Along the way, it also adapted to major technological advances.

A constant throughout has been an emphasis on building and maintaining trust from customers and employees alike. While not every employee will ascend to an executive role the way Petrow did, she learned from her own development the value of empowering people.

“One of my favorite accomplishments is seeing people within the organization grow and take on new roles, because I know what that meant to me personally,” she says. “I’m hoping that anybody here now could be thinking, ‘Hey, I could have her job someday, because she started where I started.’”

Petrow’s business experience actually started at Rank’s Grocery in tiny Sturgeon, Pennsylvania, outside of Pittsburgh. Her grandparents, and then her mother, owned the store, and her first job was working the penny candy counter, stocking shelves and eventually running the cash register and deli alongside her three sisters.

“My parents and my grandparents worked hard, seven days a week,” Petrow says. “We grew up understanding that there were certain things we didn’t get to do. We didn’t get to do sports because we had to work. So you learned the value of work and also of community. It was a really cool place. You came in and everybody knew you. It was just a great sense of community.”

That was a foundational experience Petrow can only fully appreciate in retrospect. Running a security company is more nuanced than running a candy counter, but the work ethic has never left her. It served her well when she was hired for the sales consultant role at Vector shortly after graduating from Shippensburg University with a degree in management. Petrow had no idea what she wanted to do in her career, but she plunged into the opportunity.

Back then, home security systems were entirely manual, similar to home insurance in that you would set it, forget it and hope you never actually needed it. For those who weren’t so fortunate, Petrow was a resource.

“I loved helping families that had been impacted by a crime or problem in their neighborhood, helping them again feel comfortable in their homes,” she says.

Petrow felt increasingly comfortable in the security business, so she was not intimidated when asked, at a young age, to take over management of Vector’s monitoring center — the backbone of the company, in that it is the part of the business that customers interact with. She looks back now and realizes she really had no business taking on such an important task, given her relative inexperience at the time.

“When you’re young, you think you can do anything and you think you know all the answers and you just jump in,” she says. “Sometimes it’s just by the grace of God that you don’t screw anything up.”

Petrow, though, had bosses who helped usher her along and who made the progression feel natural instead of forced. It was the same when she moved to Maryland for several years to run the company’s branch in the Washington, D.C., area. These experiences give Petrow a deeper understanding than many executives have of the difficulties and importance of workers on the front lines.

“Once you’ve done all those positions,” she says, “you recognize that they’re not quite as easy as someone may think. You have a better affinity for the work that gets done and the people that are doing it.”

As she ascended within Vector’s structure, Petrow learned the security business inside and out. Her preparation for an eventual ascension into the president and CEO role, however, was assisted by some external education.

In the mid-2000s, Vector’s board of directors — recognizing Petrow’s ultimate potential and importance in the company’s succession plans — recommended that she enroll in Harvard Business School’s Advanced Management Program. The course is designed to help business executives come up with ways to tackle strategic challenges and lead with greater confidence.

Petrow, who by then was Vector’s COO, was given the leeway to fully devote her schedule to the program. She graduated in 2006.

“My biggest takeaway was the importance of diversity of thought and experiences,” she says. “I would prepare with my team for every class and always thought we had the best answer. You would then go into class and hear dozens of other responses that we may not even have thought of or discussed. It was amazing the creativity and variety of options that truly exist if you are open-minded and try to look at challenges through different lenses.”

It was yet another foundational experience. Today, when faced with a problem that doesn’t appear to have many options, Petrow engages more people and broadens her lens to avoid becoming static or myopic.

The executive world was once static, dominated as it was by men. But women like Petrow bucked the status quo and helped normalize the idea of a female CEO, even though there were biases stacked against her. She remembers giving a presentation at a conference early in her tenure as CEO and a man in the front row reading a newspaper, ignoring her.

“You just have to persevere,” she says. “Anybody that knows me knows that ‘tenacious’ is a good descriptor. When there’s something I strongly believe in, I don’t give up. You can’t let everybody’s opinions bother you. Just have confidence in what you’re doing and push forward. I don’t expect to change the world; I just want to add value where I can.”

Petrow has spent 40 years adding value to Vector Security, and any mistakes made along the way have been opportunities for growth.

“When you’re with a company for a long time, you have the ability to make mistakes and people don’t mark you by that mistake, because you’ve done other things that are great,” she says. “You get sort of balanced. I think when you’re not at one place, you probably can be more risk-averse, because you don’t have a foundation of good performance.”

Petrow’s performance has allowed her to move to the top of the organizational ladder at Vector. And even though she has been with the company since 1982, the multitude of roles she has held in that time always made the work feel fresh.

That’s what she wants for her employees and her company, which has consistently grown in an ever-evolving industry as the COVID-19 pandemic heightened demand for home security systems.

“There was a lot of disruption in society, and I think people wanted to secure their homes,” Petrow says. “The pandemic has really, I think, been a reflection on society’s concerns about security and safety.”

Of course, as demand for Vector’s services has increased, so has its need for reliable workers at a time when the nation is grappling with a workforce shortage. In the pandemic era, Vector has become more flexible, with some remote and hybrid positions, and the company’s training and onboarding programs have been streamlined to allow certain positions to be productive sooner. Through a companywide business transformation effort, compensation, benefits and processes have been examined in order to both meet customer needs and address the changing workforce dynamics.

“When individuals are not in the correct position, the position has outgrown their skills, or they are no longer contributing, that hurts the organization and impacts the team,” Petrow says. “Making the right people decisions is a key part of the role.”

Petrow expands that concept to the people she surrounds herself with. She acknowledges that her own experience of, as she puts it, “growing up at Vector,” can be a limiting factor, in that she has not intimately experienced programs and processes at other companies.

“You have to recognize your strengths and weaknesses and make sure that you are surrounding yourself with individuals that can add value,” she says. “Putting in place a great team is a challenge, but well worth the investment of time and effort. My team at Vector makes me better.”

As a part of the Vector team, Petrow has explored and capitalized on her skills and work ethic and enjoyed tremendous personal and professional growth — all while staying put. It has taught her plenty of lessons to pass on to others.

“Don’t be afraid to reach higher or to fail,” she says. “Too often, women, in particular, think they need to have all the knowledge or be perfect to take on something new or make an important decision. You don’t. It’s OK to make a decision that is wrong, as long as you recognize it and make corrections. It’s OK to fail at something, as long as you have grown from the experience. Most importantly, do something you love and feel fulfilled doing.” ● 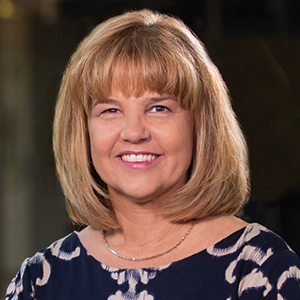