2021’s M&A boom continues, but headwinds could slow the pace 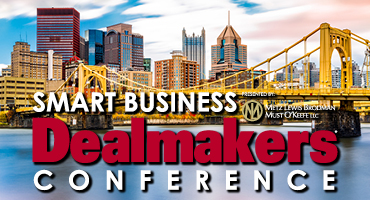 The 2021 deal year was absolutely on fire with activity. In the U.S., according to KPMG, the deal market accounted for $2.9 trillion in transactions, a 55 percent increase from 2020’s $1.9 trillion.

That high-volume trend was seen across the globe. According to Reuters, global M&A volume exceeded $5 trillion for the first time ever, eclipsing the $4.5 trillion record set in 2007. The $5.8 trillion in deal value is a 64 percent increase from the previous year.

The deal professionals we spoke with see the 2022 deal year with optimism, and they expect the rapid pace of transactions to continue. However, headwinds in the form of higher interest rates, COVID uncertainty and inflation could create resistance.

“We entered 2022 with a very strong market tailwind,” says Stephen J. Gurgovits Jr., managing partner of Tecum Capital Partners. “There is still an abundance of capital chasing deals, and it should remain a vibrant market at least for the first half of 2022.”

“I don’t think it will be quite at the level that it was in 2021 due to continued COVID uncertainty and the interest rate environment, but I do expect it to be a high-activity year in M&A,” he says.

Both Gurgovits and Brodman expect 2021’s record activity will continue until the cost of capital rises and inflation increases, and if the pandemic persists. Interest rates seem to be a potential spoiler that deal professionals are keeping their eyes on.

“We are closely watching to see if the Fed can manage to increase rates without causing the economy to drastically slow down,” Gurgovits says.

Looking at the early stage side, Michael Matesic, president and CEO of Idea Foundry, says investors are eager to look at earlier deals, given the market success the last few years, knowing that the returns might exceed the market in three to five years. And while more established businesses might see the headwinds of continued challenges as potential foils, Matesic says entrepreneurs see opportunity.

“Some of our most successful companies started in uncertain times, and many of our current companies see these as uncertain times,” he says. “But most of our true entrepreneurs are enthusiastic about 2022, somewhat due to rising interest by investors in earlier deals.”

For sellers to have the same success many realized last year, a time during which many saw valuations reach higher-than-expected levels, Brodman says they should make sure their business is really ready to sell.

“We see so many companies that go to sell and their financial statement may look OK, but they haven’t addressed other risk areas in their business,” he says. “So, my No. 1 bit of advice would be to focus on the key aspects of your business that need to be made sale ready.”

Gurgovits says the opportunity is still there for sellers to capitalize, given the current conditions, and get a deal done in 2022. He also thinks the threat of tax hikes in the current environment is real, which could propel more business owners toward a sale.

“While Build Back Better was tabled for now, there are clearly political and economic forces pointing to higher tax rates at some point in the near future, which would continue to make this period an opportune time to sell,” he says.

Brodman, however, doesn’t see taxes as the threat they were a year ago.

“I don’t think Joe Biden is going to have the strength to get any major tax changes pushed through in 2022,” he says.

KPMG’s 2021 year-end business leaders survey found that executives will continue dealmaking because they need to remain on the offensive, as competitors still have record amounts of cash they’re eager to put to work.

For buyers to find success, Brodman says they’ll need to work hard to find solid off-market targets, because those are typically where the best deals are made.
Gurgovits also sees that the onus is on buyers to put in the work to mee1t their goals.

“Be prepared to compete harder for deals and pay more money to win them,” he says. ●